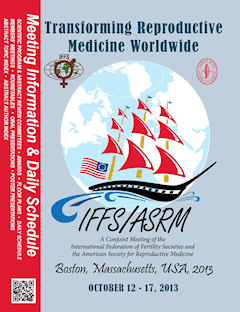 Once a year, doctors, nurses, lab directors, clinicians, and other professionals in the field of infertility and fertility treatment come together for a professional meeting. The group is called ASRM, American Society of Reproductive Medicine; this year the conference is being held in Boston. And it’s being held this week.

Here is a just a teaser on what we will be hearing from the conference. A highlight. Or two.

One, a further statement about plastic and our reproductive health. We’ve been hearing about BPA and pregnancy for years. Maybe some of us still doubt how serious these concerns are, but the scientists don’t question it all that much anymore. They are pretty clear. Here’s what Dr. Linda Giudice, President of ASRM had to say about the studies about BPA (a chemical that is in and released from plastics) presented at the conference.  "Many studies on environmental contaminants' impact on reproductive capacity have been focused on infertility patients and it is clear that high levels of exposure affect them negatively," Dr. Linda Giudice, president of ASRM, said in a statement. "These studies extend our observations to the general population and show that these chemicals are a cause for concern to all of us."

Big news as well at the conference about how many IVF births have been achieved since the birth of Louise Brown via IVF success thirty-five years ago.

Births have increased exponentially over the years, according to the research. In 1990, a little more than a decade after the first IVF birth, about 95,000 babies were born. By 2000, that figure had grown to nearly 1 million, and by 2007, it had climbed to more than 2 million.

Stay tuned for more news from the ASRM conference. We are looking forward to posting information from the RMACT doctors, clinical staff and team members who are attending this year’s conference.