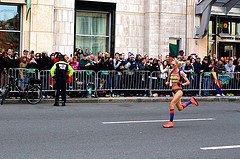 After The Boston Marathon Tragedy

I was praying yesterday that it was a natural disaster. Or even an accidental disaster or failing, like a gas main explosion.

Anything at all that wasn't a deliberately inflicted trauma and tragedy.

I was praying that it wasn't really an act of terror and carnage.

I've never been to the Boston Marathon.

But I've been to the New York City Marathon more times than I count.

I went in the 1970's, when the race was entirely run in the park. My mother and father both ran the marathon, several times.

It was not all that cool to run then. It was kind of a nutsy thing my parents did. Along with pasta parties the night before to "carb load". They both belonged to a running group and off they would go on the weekends, for their eight and twelve and sixteen mile training runs.

They were weird. But they were my parents. And not so secretly, I was proud of them. I saw the preparation, the time, and everything else that they committed to running races.

And I got to see their joy. As an ex-runner myself (a recovering runner?), I know what it's like to get out there and put in the miles. Some of it's exhilarating and some of it is just plain painful.

My parents ran because of the joy. And the satisfaction. And the accomplishment. I know because I shared that with them.

I used to love to run with my mother. It was the only time that I got to have her all to myself. No interruptions. No distractions. All her attention. I never really loved running, except for moments of it. But I did love running with my mother.

Musings On Running and Freedom

What I realize now, decades later, was the freedom that they felt, that I felt, while running. For some, it may be running away from something. For my parents and for me, it was running towards something and then finding you were in the moment of just being there. It was the exhilaration of being able to move our own bodies, ask more of our selves. Be warm when it was cold. Be sweaty when it was hot. Find our own rhythm and also learn to adapt to a running partner's pace.

I learned things about my mother on those runs that I would never have been able to learn anywhere else. Now, when we walk, the same kinds of conversations unwind. I learned that she liked to charge up hills and take it easy on the downhills. Quite opposite of me. I learned that she would invariably find the hilliest course and then be surprised by all the hills. The hills invigorated her.

My first and only half marathon was in New Hampshire. My younger sister was supposed to run it with me and unfortunately got injured beforehand. I'm not and was never much of a racer. I had joined the race as a way for my sister and me to do something together.

That's not how it worked out. Instead, in the hills (in New Hampshire, really, they're mountains), I ran by myself. With a few hundred other folks. I had meant to get there early enough so that the day before I could drive the course but life got in the way of that. Off I went, very well trained, and with no real clue of what the race course was like. I had run well past the distance, my longest training run being almost seventeen miles, so I felt confident for the 13.1 miles.

I was never a fast runner. Middle of the pack at best, or even slower. I was a strong runner though and from running with my mother and my running partners, I knew how to handle hills. One step at a time.

Most of the runners in the race were locals, from the town itself or very nearby. It's quite possible that I came from the farthest away, from Connecticut.

Not knowing the course, as the locals did, I didn't know to pace myself with the hills. I just kept running up them, passing people.

You might think the moral of this story is that I pooped out on some hill or another or that I ended up walking because the hills were too much.

Nope. The moral, if there's just one to notice here, is that because I didn't know the course, I just ran it. And because I was so well trained, I could. I ran up every hill, passing many people, who on a normal day were faster than me. I assumed I had the strength and courage because of my training.

Infertility and Its Life Lessons

This is a blog about infertility and fertility. And so here, at the very end, it is.

Infertility prepared me for the hills. And the valleys and the flat parts and the distance.

Infertility prepared me for all of it.

My heart goes out to everyone who suffered in yesterday's tragedy at the Boston Marathon. The ripple effect is enormous. It affects us all. We all feel the pain and the loss of freedom.

Infertility didn't prepare me for this sadness, this pain, this event. I don't know how we even begin to make sense of what happened. How we support those who lost a child, parent, brother, sister, friend or colleague.

What do we do? How can we help?

And the loss of innocence that has occurred, yet again.

My head is bowed in sorrow for all of us.